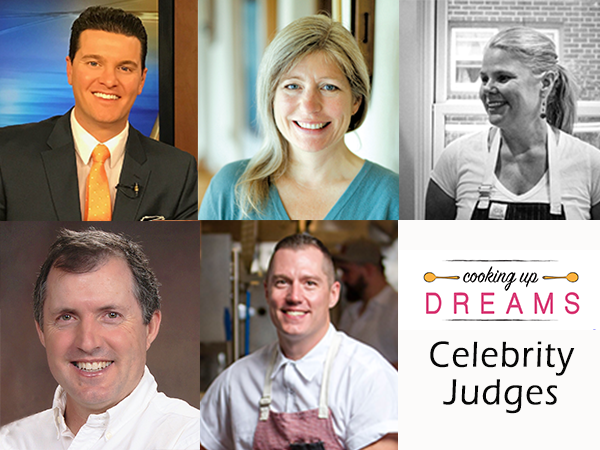 Family Service Agency today unveiled the celebrity judges who will select the best chef at the 3rd Annual Cooking Up Dreams scheduled the evening of March 31, 2017 from 6:30 to 10 p.m. at the Fess Parker Doubletree Resort in Santa Barbara.

Joey Buttitta, a member of the NewsChannel 3 morning anchor team, provides viewers from Santa Barbara, Ventura and San Luis Obispo counties with the news of the day. You may also recognize him from season 27 of “The Amazing Race” where with his fiancée, Kelsey Gerckens, won $1 million dollars after crossing the finish line first.

For aficionados of Santa Barbara’s ever-evolving culinary scene, The Restaurant Guy has been required reading ever since a tech geek named John Dickson started blogging about openings, closings, and assorted in-betweens on his SantaBarbara.com website several years ago. In 2012, Dickson brought his restaurant reporting talents to the print edition of The Santa Barbara Independent, where he’s published weekly alongside the Dining Guide.

Local food has been Krista Harris’ passion since she first started shopping at farmers markets in the mid 1980s. In 2009 she started Edible Santa Barbara, a food magazine devoted to local, seasonal and sustainable food. Edible Santa Barbara was awarded the 2011 Publication of the Year Award from the James Beard Foundation.

Santa Barbara native, Jen Jasinski is the first Denver chef to win The James Beard Foundation Best Chef Southwest award. Jen is a graduate of the Santa Barbara City College Culinary Arts School.  She was a finalist on Bravo’s Top Chef Masters Season 5 and a semi-finalist for the James Beard Foundation Outstanding Chef award. Her restaurants, Rioja, Bistro Vendôme, Euclid Hall and Stoic & Genuine are consistently listed among the top restaurants in Denver.

Max Mackissock, partner and Executive Chef of Bar Dough, has manned and directed kitchens in Colorado for the past 15 years.  His years of study in Italy on technique and tradition have contributed to his well defined skill set towards Italian cuisine. He has been named ‘Denver’s Best Chef’ and was awarded Denver’s first-ever four star review from The Denver Post.

“Cooking Up Dreams is a unique fundraising event featuring a culinary competition between leading local chefs,” explains event co-chair Meredith Garofalo. “Celebrity judges and 300 guests will taste the thoughtfully prepared food made by each chef to vote on the top dish for the People’s Choice and Judges’ Awards.”

Proceeds from Cooking Up Dreams support Family Service Agency’s youth enrichment programs including Big Brothers Big Sisters, school-based counseling, and youth behavioral health—all programs targeting low-income at-risk youth who, with the help of counseling and mentors, are able to improve their personal growth and academic experience. There are many ways to participate!

To learn more about the event, purchase tickets or to become a sponsor with reserved seating, please visit www.cookingupdreams.org/.